From Valentines Day 1973 comes this flyer for Bruce Springsteen opening for Dan Hicks and his Hot Licks at what was then the new VCU gym on Franklin Street. Bruce was a regular in Richmond in the early 70s, first with Steel Mill, then later with his own band, including a 9 show run at The Back Door on Grace Street in February of 1972 (later Twisters & Nanci Raygun, now Strange Matter). Click the photo below for the high resolution image.

The Brucebase website has a few pictures from this concert and a little history here.

And here is a review of Bruce's set that night that ran in the University of Richmond Collegian on February 22nd, 1973. 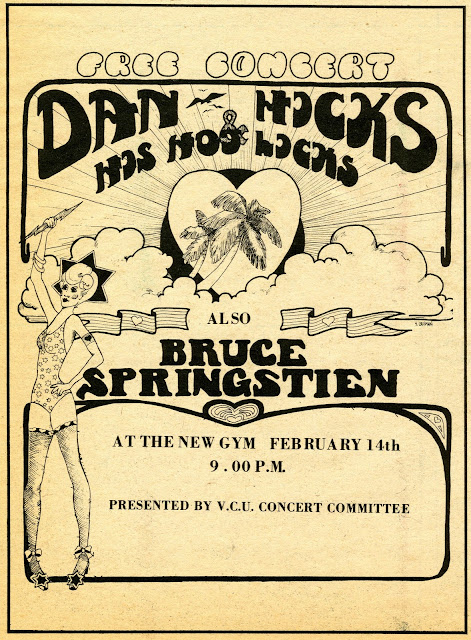 Image from the February 1973 issue of the Fan Free Funnies, courtesy of VCU Libraries
Posted by Vintage Richmond at 7:26 AM

Email ThisBlogThis!Share to TwitterShare to FacebookShare to Pinterest
Labels: music, The Fan, VCU